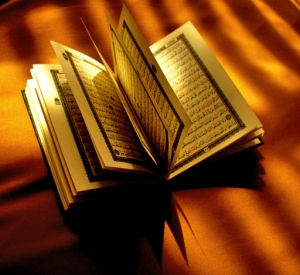 Once again, an artistic representation of Islam by a non-Muslim is making news. Similar to the Danish cartoon scandal a few years ago (and going back at least as far as Dante’s depiction of Muhammad in his “Divine Comedy”), the latest uproar centers on Californian Sandow Birk’s “American Qur’an” project. Birk, who has achieved some level of fame for his critical and socially minded paintings (focusing on gay rights, immigration, the L.A. police department, and the U.S. invasion of Iraq), decided upon this project after concluding “the Koran may be the most important book on earth, but few Americans know anything about it.”

The hand-painted series will eventually include all 114 chapters, or suras, of the Qur’an (taken from an 1861 English translation that is now copyright-free). Each piece – watercolors and gouaches that draw upon flat Persian art styles – incorporates a transcription of the particular sura on top of a typical American scene. For example, sura #100 (often called “The Chargers”), which contains the war-horse line about “chargers, snorting, striking sparks of fire,” is placed over a painting of a NASCAR race. One particularly problematic work-on-paper has the sura “Smoke” (“a day when the sky will bring forth a smoke which will overwhelm the people”) combined with a 9/11 image of New York crowds watching the twin towers in flames. As is perhaps to be expected, as outrage among the Muslim community increases, so does the publicity of the artist and galleries. For the full story, click here.