Conference Report:
By Daniel Jones, and Thomas Malby, graduating students from The University of Northampton. 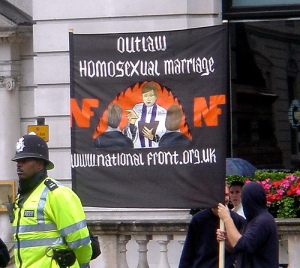 On 15 April 2011 at the University of Northampton, the Radicalism and New Media Research Group hosted a daylong conference entitled Think Global, Hate Local: Britain’s Far-Right in Focus. This event brought together academics, activists and professionals in a unique discussion on the far right in modern Britain.

The keynote address was delivered by Professor Nigel Copsey of the University of Teesside, who analysed the result of the British National Party’s (BNP) local and national election campaigns in 2010. A detailed and forensic breakdown of their electoral result was backed up by a thorough examination of the party structure and activity that supported it. Professor Copsey challenged many of the perceptions of the 2010 result by pointing out that, while Unite Against Fascism acted as volunteers for the Labour Party and stopped the growth of the BNP, there were other factors at play internally. It was also pointed out that, while in a First-Past-The-Post system we tend to focus on victory, the BNP did manage a third place in Barking and a fourth place in Stoke on Trent. This more ambivalent result, Professor Copsey argued, was at least partly down to the internal strife of the BNP, resulting in inexperienced campaigners occupying key positions. It was altogether an interesting challenge to some preconceptions that the 2010 election result was a mortal blow dealt to the BNP externally; instead suggesting that in part this might have been a self-inflicted injury.

The subsequent morning panel, consisting of academics Dr Paul Jackson and Professor Raphael Cohen-Almagor, focused on wider concepts of the British far-right. While Dr Jackson spoke on ‘Colin Jordan The “Universal” Nazi’, Professor Cohen-Almagor challenged the audience with free speech theory in his talk, ‘Hate on the Internet’. Professor Cohen-Almagor’s piece asked us to separate, in our minds, speech that was hateful and unpleasant, but which is legal, from outright incitement to violence, which is illegal. The delivery of the talk was very dynamic, with the audience taken on a trip back to John Stuart Mill’s ideas from On Liberty in order to think about the origins, and necessary limitations, of free speech. It was a thought provoking talk, one that framed the rest of the day by forcing the audience to separate the unpleasant from the illegal, a subject that would be returned to more directly in the final panel of the day. Dr Jackson’s talk then delved into a case study, Colin Jordan, and examined the roots of the modern British far-right. Punctuated by the use of Jordan’s cartoons and ‘The Cotswold Declaration’, the talk formed a good bedrock for the afternoon’s sessions on the English Defence League (EDL) and the BNP – allowing us to understand where these groups came from, and their ideological background.

To finish the morning, Gerry Gable launched his new report, Lone Wolves: Myth or Reality?, which had been written with the collaboration of Dr Paul Jackson. The report, published by Searchlight and commissioned by the Department of Communities and Local Government, argues recent so-called ‘Lone Wolf’ terrorists are, in fact, a result of wider networks of extreme right-wing activity. This report is now available online, here.

The afternoon session commenced with the second panel of the day, entitled: ‘Discourses of Hate and the British Far-Right.’ This panel comprised the ‘activist’ section of the conference, with talks from: Sonia Gable, Deputy Editor of Searchlight; Matthew Collins, reporter and contributor to Searchlight; and Graeme Atkinson, European Editor of Searchlight. Gable’s talk illuminated the appalling finances of the BNP, particularly highlighting not only the well-publicised perceived failure of the BNP’s bid for electoral success in 2010, but also the incompetence at the heart of the party. This was followed by Collins, whose discussion on the EDL helped to frame the rest of the conference. Particular attention was paid to the factors contributing to the rise of the EDL, the leadership of the movement, and the violent nature of some of the members, especially the much more extreme ‘Infidels’ breakaway faction. Yet the prevailing, and concluding, message of Collins’ address was the sense of the EDL being a small group, only around 500 strong, with the ‘Infidels’ making up a further 100. Following this, Graeme Atkinson provided a broader perspective on the EDL and BNP, revealing their transnational links. Atkinson explained the BNP’s connections to the German far-right National Democratic Party and Hungary’s far-right Jobbik, alongside their collaboration with convicted terrorists, such as Roberto Fiore MEP. Atkinson also warned of the attraction of movements such as the EDL to the extreme right-wing, potentially leading to similar movements being exported to Europe and America.

The final panel of the day was presented by the National Coordinator for Domestic Extremism (NCDE), providing the policing perspective. The NCDE first established that it was not their job to stop the EDL, but rather to prevent crime and damage, and preserve the right for lawful political activity to occur. The NCDE provided their own definition of the EDL, stating that they are a ‘potential’ extreme right-wing group, yet also highlighted how they contrasted with other extreme right groups in a number of ways. This included the support for Israel, the organisation’s multi-faith and multi-ethnic membership, and embrace of LGBT rights. The NCDE also noted the EDL’s public rejection of extreme, far-right and Nazi groups, leading them to conclude that the EDL are a ‘right of centre, pro-nationalist social movement engaged in direct action demonstrations.’ In sharp contrast to the panels earlier in the day, the NCDE claimed that the EDL are not racist, as Islam is not defined as a race by UK law. Moreover, they stressed their research found the movement to be not extreme right-wing, and often are not predominantly violent – a theme attested to by police who attended the protests. He recalled how most of the events were attended by families with a notable LGBT and multiracial presence. Arrests at such events came from drunk and disorderly people, or clashes with counter demonstrators, providing a conflicting perspective to the one provided by academics and activists.

A fascinating conference came to an end with a brief conclusion by Dr Matthew Feldman. The conference was a great success for the fledgling Radicalism and New Media research group, allowing three distinct perspectives to come together and compare notes on an important and highly controversial contemporary issue. Notes and podcasts of contributions to this event are available here.