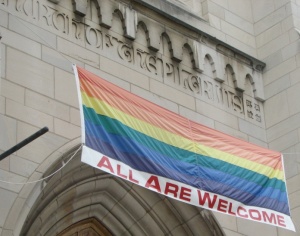 Contemporary Christian music (CCM) is decidedly conservative and evangelical. However, like most areas of life the closet is filled with all sorts of things, to include artists who have felt the need to live secret lives due to their sexual orientation. CCM artist Jennifer Knapp recently confirmed what many suspected. Douglas Harrison, assistant professor of English at Florida Gulf Coast University, has provided an account of Knapp’s interview with Christianity Today magazine and Larry King Live. Pointing to black gospel artist Tonéx and CCMer Ray Boltz, Harrison reminds the reader that throughout the history of gospel music–whether African-American, Southern, CCM, or choir–gay musicians (if evangelical) have had to remain closeted. But why is an arguably conservative genre of music filled with what evangelicalism has long demonized? Harrison argues that the thinking has been that gay musicians are often attracted to the “flamboyance and theatricality of Christian entertainment.” While the evangelical subculture has made life difficult for those seeking to maintain their faith and music while being true to their sexual orientation, “Tonéx and Knapp…actively resist being inscribed into evangelicalism’s punitive discourse of the self-embattled homosexual.” Although the “ideological center of evangelical culture may well hold steadfast in its opposition toward homosexuality for some time to come,” states Harrison, those like Tonéx and Knapp are seeking to express (with confidence) who they are. Harrison considers these moments to be the “true value of the sacred music of American Protestantism: its marvelous, incantatory, ever-dawning capacity to transcend orthodoxy’s efforts to control what it means or to put limits on the redemptive work it accomplishes for all those who find in it the key for their souls to sing in.” Read the full story here.

Eating Together: Friendship and Homosexuality By Joel James Shuman From The Blackwell Companion to Christian Ethics