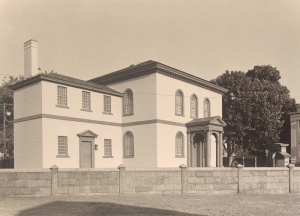 America’s oldest synagogue, the Touro Synagogue in Newport, Rhode Island, opens its new $12 million visitors center today. The center’s curator, David Kleiman, declared that the synagogue is a “living symbol of the concept of religious freedom, separation of church and state. The building and its history are the embodiment of that concept in America.” Roger Williams’ colony of Rhode Island was founded on this concept of religious freedom, and the first families of Sephardic Jews moved to seek refuge there in 1658. A century later, Isaac Touro became the Jewish community’s first spiritual leader when he emigrated from Amsterdam to Newport. Not long after that, George Washington wrote a letter to the synagogue in 1790 which famously stated that the new American government “gives to bigotry no sanction, to persecution no assistance.” If you visit the synagogue’s new visitors center, you will see a copy of this letter and other important historical documents on display. Read more here. Visit the synagogue’s website here.

Not in the Heavens: The Premodern Roots of Jewish Secularism
By David Biale, University of California, Davis
(Vol. 3, April 2008)
Religion Compass

One thought on “NEWS: Visit the Oldest Synagogue in North America”