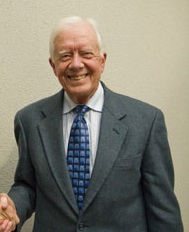 Recently, Jimmy Carter announced that his decision to leave the Southern Baptist Convention relied largely on the unfair treatment of women. A Southern Baptist for sixty years, Carter explained that he could no longer support a religious worldview that considered women inferior to men. Furthermore, Carter asserted that the “words of God” do not support the oppression of women and that such interpretations have led to considerable human rights violations around the world. Carter’s announcement (found here) follows a similar announcement made by The Elders, a non-governmental organization led by Nelson Mandela (see their statement here). In addition to Carter and Mandela, The Elders include such renowned leaders as Kofi Anan, Mary Robinson and Desmond Tutu who no longer hold public office but remain interested in serving others. Currently, addressing the role religion plays in discriminating and oppressing women is a major initiative for the Elders. While popular blogs like feministing.com have directed readers to Carter’s statement, major news outlets have yet to cover Carter or the Elders.

2 thoughts on “NEWS: Jimmy Carter, the Elders Speak Out Against Religion”